Welcome To my Blog!

Welcome to my Blog! Here I will present my latest digiscrapping LO's for you to view and comment on. I'll also present the latest creations of the designers and/or sites I'm a CT member of and last but not least I'll inform you of special events, i.e. travels or festivities concerning me and my family.

Gorgeous antique kit made in stunning browns, soft pinks, gold and pale greens. Gorgeous textures and designs that covers different styles such as: Steam punk, Victorian romance, rustic, grunge, country, elegant and classy.A kit to embrace and make daily use of it, a real gem to treasure like our own roots...to remember and never forget.Including 20 papers of 12x12 inches-JPG-300dpi and 80 gorgeous assorted elements at PNG-300dpi

This gorgeous vintage kit is available at Digidesignresort
I've created these two pages with this lovely kit which is sure to become one of my favourites:
Eingestellt von Andrea Hirlehei um 9:26 PM No comments:

This fantastic set of templates by JanetB Designs will be in the Digidesignresort  Advent calendar, but can be purchased at Digidesignresort if you miss one.  The set is perfect for single pages where you need lots of photos, or use these as album pages.  Don't forget that you can rotate these, or flip them vertically or horizontally to get multiple uses that look completely different!

Janet's TOU now includes the use of these templates by creative team members!  Please read it thoroughly.Janet of JanetB Designs has other sets of page templates, and several sets of album templates in square or rectangular formats.  Be sure to check them out!


I've created these two LO's . The first LO was created with template #1, the second one with template#4, however I flipped this template vertically.

Here is a wonderful new collection by JanetB!  Great things come with fresh starts!  Like a new year, a new home, a new job, a goal you've set for yourself.  This kit has fresh clean colors and can be used at any time of year or for any reason.  What are the possibilities in your life that you want to capture in a layout?There is a set of clusters, a set of stacked papers, a set of 41 wordbits all at 300 dpi

This fantastic collection is available at Digidesignresort and at The Studio.
And here are two pages I've created with this awesome kit:
Eingestellt von Andrea Hirlehei um 10:01 PM No comments:

Celebrate and remember your favourite holiday memories with this classic and traditional Christmas kit. It contains your classic reds and greens, with a twist of blue. It contains 18 - 300 dpi JPEG Papers and 56 - 300 dpi Elements. S4H, S4O, personal use. Shadows are for preview purposes only.

This beautiful kit is available at these stores:
DigiridooScraps
Digidesignresort
Godigitalscrapbooking
And here's a layout I made: 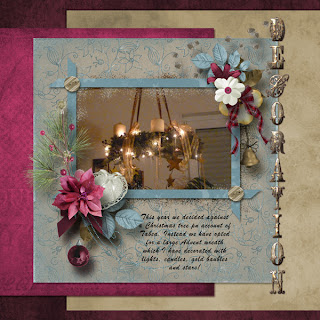 Here's a sweet, fun and colourful kit to get your started scrapping those sweet holiday photos. SWEET HOLIDAY SURPRISE. It's a great collaboration with K of D Designsthat will keep you scrapping for hours! This part contains 27 - 300 dpi png elements and 12 - 300 dpi papers in JPEG format. Also included is a 12 x 12 Christmas template. Kof D Design's contribution contains 3 alphas, 12 - 300 dpi papers and 30 elements with additional elements with shadows and some fabulous Word Art.

This delicious, yummy kit is available at Digiridoo Scraps and here's a page I made:
Eingestellt von Andrea Hirlehei um 9:57 PM No comments:

Here's my entry for the December 2011 Journalling Challenge over at GDS: 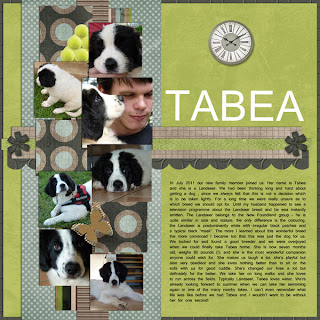 In July 2011 our new family member joined us. Her name is Tabea and she is a Landseer. We had been thinking long and hard about getting a dog , since we always felt that this is not a decision which is to be taken lightly. For a long time we were really unsure as to which breed we should opt for. Until my husband happened to see a television programme about the Landseer breed and he was instantly smitten. The Landseer belongs to the New Foundland group - he is quite similar in size and stature, the only difference is the colouring. the Landseer is predominantly white with irregular black patches and a typical black “mask”. The more I learned about this wonderful breed the more convinced I became too that this was just the dog for us. We looked for and found a good breeder and we were overjoyed when we could finally take Tabea home. She is now seven months old, weighs 80 pounds (!), and she is the most wonderful companion anyone could wish for. She makes us laugh a lot, she’s playful but also very obedient and she loves nothing better than to sit on the sofa with us for good cuddle. She’s changed our lives a lot but definately for the better. We take her on long walks and she loves to run across the fields. Typically Landseer, Tabea loves water. We’re already looking forward to summer when we can take her swimming again in one of the many nearby lakes. I can’t even remember what life was like before we had Tabea and I wouldn’t want to be without her for one second!

Here's another great kit by Studio4 Designworks. It's called Ryan's Ride and it's perfect for all your boy's photos. The kit is so versatile that you can use it for small boy's as well as for teenage boy's photos. The colours include browns and tans but also vivid greens and blues.

The kit contains 19 papers and 63 elements all at 300 dpi. The kit is available at Digidesignresort.

I've created these two pages with this wonderful, fun kit:

The kit contains 12 papers and 80 elements all at 300 dpi and is available at Digidesignresort.
I've created these two layouts with this lovely kit:
Eingestellt von Andrea Hirlehei um 7:32 PM No comments:

This bundle is huge!  Starting with the kit itself -- in cool frosty greens and grays, and warm golds give you many options for not only your Christmas and winter pages, but also most any other occasion.  You'll find 18 textured and several shabby patterned papers, and 70 unique elements, no repeats, none recolored, and all without drop shadows.  There is a set of 4 stacked papers giving you a head start on gorgeous pages.  The set of 5 clusters is ready for you to  place on a paper, or on the stacked papers and you're done!  The set of 6 wordarts make the perfect finishing touch for any page.  And finally, there's a set of matching glitters.  The asl file will only work in Photoshop or Photoshop Elements, but there is a folder of seamless glitter tiles to use in other programs.

The bundle is available at Digidesignresort. I've made these two layouts with this gorgeous bundle:

Here's a wonderful Christmas collaboration kit for you by Studio4 Designworks and Feli.Designs. It's just sooo big and jam packed with beautifully coloured elements and papers, just perfect for all your holiday layouts and projects.

The kit contains 26 papers and 110 elements all at 300 dpi. It is available at these stores:
Digidesignresorts
Digiridoo Scraps
Godigitalscrapbooking
I made these two LO's with this really gorgeous kit:
For this LO I used the new 2012 Calendar Templates by Studio4 Designworks which are also available at these stores:
Digidesignresort
Digiridoo Scraps
Godigitalscrapbooking
And here's another one with this fantastic set of templates:
Kit: Petcetera by Studio4 Designworks
Eingestellt von Andrea Hirlehei um 6:54 PM 1 comment:

Digidesignresort Collaboration Kit "Notting Hill" Part A and B

It's collab time at Digidesignresort again! This month's mega is called "Notting Hill" and it is extremely wonderful and versatile. It's perfect for baby and childrens' pages, LO's of all your loved ones and all sorts of different occasions. The colours are predominantly dark reds and soft pinks but there are also splashes of cream and tan to be found.

The kit contains 139 elements, 67 papers and 3 wordart. It was designed for you by these fantastic designers:
MC Designs, Aurelie, Butterfly, Cajoline Scrap, Pati Araujo, Helena Monteiro, Kakleidesigns, Mariscrap, Mary89, Mirelle Candeloro, MaChabine (M.Creations),Perledesigns, Pliscrap, Saskia Designs, Papierstudio, SkuteDesigns, Mediterranka Designs andMistica Designs.
This wonderful collaboration kit is available at Digidesignresort and the best part of it all: if you spend just $30 at the store, you'll receive it as a free gift.
I've created these two LO's for you with this fantastic collaboration kit:
Eingestellt von Andrea Hirlehei um 8:58 PM No comments:

Now here is a wonderful new kit, that I personally have been waiting for for quite some time! It's called Petcetera (isn't that a neat name??:)) and it has been created by Studio4 Designworks. It's a pet themed kit and the wonderful thing is that you can scrap both your doggie and your kittie pics with it.

This lovely kit contains 18 300 dpi papers and 55 really cute 300 dpi elements. you can purchase the kit at these stores:

I've created these two LO's with this gorgeous kit and be sure that there are many more to come! :)

Andrea Hirlehei
Newcastle Emlyn, Wales, United Kingdom
During the long, hot summer of 1976 at the age of sweet 17 Patrick and I met at a disco on the pier in Eastbourne. We fell in love and had ourselves a lovely, innocent holiday romance. After continuing to write to each other for two years we lost touch until August 2012 when I contacted Patrick via facebook. We had both been going through very difficult times and started writing to each other again. Before we knew what was happening we fell in love with each other all over again and met for the first time after 36 years in October 2012. We spent four wonderful days together at the end of which we both knew that there was only one way forward for us and that was together. So, on 28th March 2013 I moved in with Patrick here in our little Welsh paradise. With this blog I would love to give family and friends whom I sadly had to leave behind in Germany an insight into my new life.

Disclaimer: As a CT member for the above mentioned designers, I have received their products for free in return for creating and posting projects (digital layouts etc). Some of the layouts you see here were done as requirements for these CT's. I receive the kits at no charge in return for the projects I create using them. Any additional advertising that I may do for them or for the stores with which they are affiliated is purely out of my dedication to these designers and the wish to see their business succeed. If you have any questions, please feel free to contact me.